Poland hadn’t necessarily been on my must-see list, but when my friend Kat absolutely insisted that we go there from Germany, I didn’t hesitate to tag it onto our trip. The deal was that Kat’s best friend back in Chicago had a nanny from Poland named Waja. Waja really wanted Kat to visit her while she’s living abroad, so I was simply tagging along for the ride. Luckily for me, it was a holiday weekend, so I didn’t have work until Wednesday.

Amazing potato pancakes with a side of hot tea & vodka.

We took an overnight bus from Berlin to Krakow on Sunday night. Kat and I originally had seats next to each other, but Kat moved to an empty aisle while the bus was still loading, and out of nowhere we each ended up sitting next to cute brothers from Australia. Funny how things work out like that.

The next morning, we arrived at the train station in Krakow and hung out at a cafe while we waited for a bus to Auschwitz. A classic tour involves visiting both the Auschwitz and Birkenau camps for a total of 4-6 hours, but all we had time for was a couple of hours in Auschwitz (and to be honest, that was more than enough for us). The weather didn’t help lighten the mood, as it was a gray and chilly day. The best word to describe the whole experience: chilling.

We went back to Krakow and were met by Waja’s grandson named Mariusz. He took us on a night tour around the city and we walked through the beautiful square where there was yet another Christmas market. We then met up with a few of his friends who are in a band. We went to a restaurant in the square where they were playing traditional Polish music. The boys were really sweet and began to serenade Kat and me with English songs. Mariusz then drove us out of the city and down south to Waja’s village – Kamienica. She welcomed us with a super jolly demeanor and a warm Polish dinner. 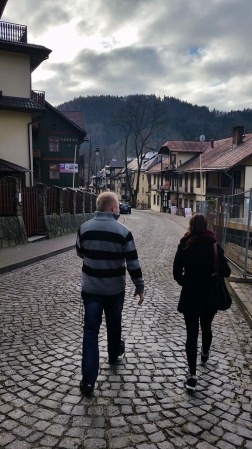 Walking through Szczawnica with Mariusz (as captured by Kat)

The next morning, Waja showed us around her village. Afterwards, Mariusz took Kat and me into the picturesque highlands as well as a nearby town called Szczawnica. We stopped at a cafe and had some of the best hot chocolate in the world. I had only had a comparable cup in France. It was the kind of hot chocolate that’s super thick and will solidfy if you let it sit for a few minutes. It was as if the barista had melted a chocolate bar right into the cup – sooo good. We had an early dinner with Waja and her family that night, then Mariusz drove us into Krakow to catch our flight back to Rome. It was an enjoyable and adventurous long weekend that I’ll never forget.

I'm Alyssa, an American firecracker born on the 4th of July living in Italy for the year. Welcome to my adventures around the world!

a weekend full of great brews, dirty shoes, and awesome views 🙌🏽⛰✨
first wedding as mr. + mrs. was one for the books 🎉 congrats marisa + leo! 💙
happy first month of marriage to the man who makes me laugh the most 😊💙